Mileage: 88,633KM
Do It Yourself: Yes
Difficulty: Easy

Well…. here are some parts that I change for the first time since owning this car, March, 2009. Some of the issues has been detected earlier (more than a year ago at least) but I kept delaying it until it come to a point which I think it is a worthwhile to do it in one shot (YMMV). The first two DIY were done two weeks ago and the rest was today.

At last after almost 4 years, my gear knob perished due to (maybe) the tropical heat which deteriorate the material to the extend it crumbled itself. I opted for the originality hence I will replace it with original gear knob.

Price for the original gear knob is much higher than any aftermarket gear knob which is easily available in any accessories shop or internet. You may end up with a good combination of leather and metal knob. The original gear knob is priced at RM260.00 (spare part agent) to RM310.70 (you should know who this is….). Unfortunately, the agent is run out of stock and restocking will only take place in another two weeks, so I have to go for the second option.

This is a straight forward DIY coz you just need to pull the old gear knob upward (shift the gear to neutral position). Slot in the replacement and you are good to go. Just pay attention to the white plastic sleeve, it may not in good shape but you need it to secure the gear knob. Replacement for this is bit expensive coz it come together with the gear shaft and base.

The cost of this part is RM74.30 from Peugeot. If I’m not mistaken, spare part agent quoted me around RM55 – RM65… can’t remember the exact figure. I bought this together with the purchase of the gear knob. Since owning the car, I had a minor leak at power steering pump area. Soon, it was covered by a thin layer of power steering oil and dirt collected during all these years, I assumed the cap coz when I traced the leak, that was the highest point at the pump which has traces of dirt and oil.

The new cap and the area surrounding is free from leak, picture taken today

Side view of the pump which is still clean

Until today, I have not change this part; almost 90K KM and 4 years. I need to replace this ASAP to prevent myself being stranded in the middle of nowhere just because of the snapped belt. I procured the replacement from spare part agent. At first, they quoted me RM60.00 for an O.E part (SKF), but when I’m there to buy it, they managed to find the original belt and it was priced at RM93.00. Peugeot quoted me around RM119.00.

The steps to change is quite easy but it may take longer than expected depend on your body flexibility. Accessing the belt from underneath the car (using hydraulic ramp) is much easier than accessing it from the top of the engine bay. A bit of muscle power is needed to push the tensionner bearing backward to slacken the belt. A 13 mm box spanner is needed and a cold engine is recommended as you need the hold on at some points of the engine area to be the leverage to push the spanner.

The spanner locked on to the tensionner bearing

The old belt, some cracks developed but still not critical 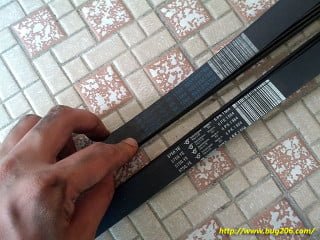 This part cost me RM195.00 from the agent and it is RM230.00 + RM7.40 (for the o-ring seal) from Peugeot. This is my first time replacing this part, It has been leaking for a quite a long time that I cannot recall when it started. All this while, I just topped up the oil once every 6 months.

The condition of my switch

After removing the switch, make sure the o-ring seal is still in place. Replace it if you buy the seal

The new switch, I did fire up the engine to check for leak and re-pressurize the system

The old switch, the leak originated from the contact point area

Guest11015 i wish to purchase used Pug206! dated from 2008 to 2010, most mileage a from 80k to 150k. but im kinda worry it will cost me alot if anything break down? they all said well-maintained but who knows until we start driving it not for an hour but for months. what's your feedback?
Guest10556 Hello there, I'm quite new with peugeot 206 and currently learning for maintaining it at your website, can i ask whether engine oil petronas 5w-30 is suitable or not for peugeot 206 1.4
Guest10312 Please do email me... If anybody ever come across same problem as i did... My email.. Afd.apandi@gmail.com....ur help@ideas@advised will be a very great help... Thanks
Guest10312 Mechanic from nearby... And he tell me the engine block burst.. A 50cent holed were there(front side of engine)... But what come to my suspicious is... The engine stil can even start till this moment.. It just it kept on spraying engine oil everywhere.. Can anybody recommend@suggest@or have any ideas?? What is really happening to my car... I dont simply believe it was engine block...
Guest10312 Hi... Hope somebody willing to answer my worst nightmares... Im driving 206..recently while driving at 50/60km speed.. Something like burst sound comin from the engine.. Then the engine got laggy n shaking but i continue driving as my house were 5minute distance.. Infront of my house i saw smoke comin from engine bay.. Then i realised engine oil was all over my passing road... Then i call
Bug

So sad to hear that, well the equipment may depends on build features and/or batch. Later build car may have all the necessary albeit not functioning but more to save part costs.
Panos Hi again, I've searched carefully for the cable multiple times and unfortunately it doesn't exist on my car. Not all cars have it :/. The main cable harness on the roof lining has 4 or 5 cables which lead to the roof panel. No extra connector for rain and light sensor. You are lucky that you have it!
Panos Hey there, I find this blog very interesting. I am tring to find the cable for rain and light sensor) on my car but unfortunately I can't find it.. I need some help. Is there any alternative to locate the cable? I am pretty sure the car came with it as its a "sportier" version (1600 xs 110 16v). It also has the extra wiring for the alarm belt which I am going to retrofit in the future. Thanks